Dozens of strangers flocked to this location man’s home after it was wrongly labeled a Pokemon gym without his permission.

The viral sensation is bringing people together in unexpected ways. One player in New York said he spoke with another train passenger for the first time in his life thanks to Pokemon Go.

Many people with social anxiety are now meeting new friends and breaking out of their shells, thanks to the way the game works.

That’s great, but there’s a dark side Nintendo is worried about: Criminals are using the game to discover potential robbery and burglary victims.

Even worse, it’s been revealed that peoples’ homes (yes, even yours or mine) could be marked as Pokémon gyms or Pokéstops. These are places where players will come to capture new Pokémon, train their own Pokémon, or acquire Pokeballs and more.

The problem? Maybe you don’t want dozens of strangers walking around in your yard like this guy had to endure: 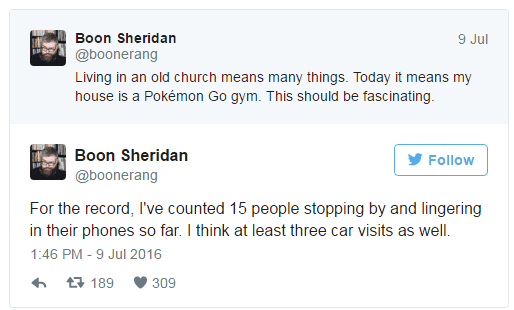 If Pokemon Go marked your house or other private location as Gym or Pokestop, you can request removal from the game’s map:

7 Steps To Keep Your House Safe While You Are Away